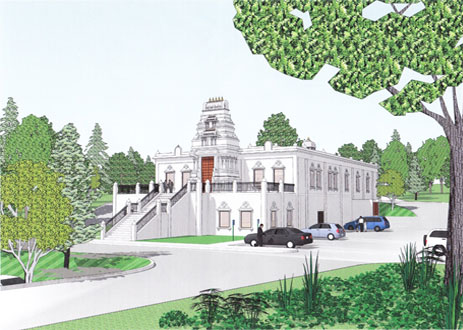 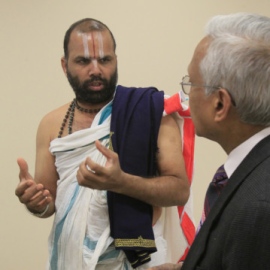 Hindu priest Venkata Laxmi Narsimhacharyulu Trichukachi (left) talks to Dr. Ram Bandi as they stand in the community area of the new Sree Venkateswara Temple as final preparations are being made for the grand opening 7-day celebration in May 2013, in Richfield, Ohio. (Karen Schiely/Akron Beacon Journal)

RICHFIELD: The dream of local Hindu devotees to Sree Venkateswara to build a temple in Northeast Ohio is being fulfilled.

Preparations are being made at Sree Venkateswara Temple of Cleveland, located at 4406 Brecksville Road, for a seven-day celebration of its grand opening. The historic opening of the first temple of its kind in Ohio begins Wednesday and extends through May 28, with the major celebration to infuse life into the presiding deity and other deities on Sunday.

“A lot of people have been waiting for years for this temple to be built because they have been driving to Pittsburgh, where the closest Venkateswara temple is located,” said Dr. Ram Bandi, chairman of the board of trustees. “Everyone in the Hindu community is excited. Most have never seen this kind of event.”

The 13,000-square-foot temple is the result of a vision that was nearly 10 years in the making. An agreement to purchase the seven acres of land where the temple now sits was made in 2007, several years after members of the local Hindu community began discussions about construction.

Richfield’s Planning and Zoning Commission approved preliminary plans for the temple in November 2007, but progress was thwarted nine days later when a group of residents — citing concerns of increased traffic and noise — filed a lawsuit. Nearly two years later, a Summit County judge ruled the temple could be built on the property and the local Hindu community, comprising an estimated 1,000 families, got busy making plans.

Construction of the $3.5 million project began at the site in January 2012. Last week, leaders of the temple walked through the two-story building with representatives of Akron-based Bennett Construction Management Inc. and Cuyahoga Falls-based David Pelligra and Architects Inc. to view the work that has been done.

The ground level houses the community hall, which will be dedicated to social, cultural and educational events. The area includes a stage, classrooms, a library, meeting room, kitchen and storage space. Social and cultural activities, including singing and dancing, are planned in the community hall during the grand-opening celebration.

The upper, or main, area includes the priest and worship area and sanctums for five deities, which were sculpted in India. The major celebration to install the sacred images in the temple on Sunday — called Prana Pratishtapanam — involves a ceremony during which a sculptor will cut open the eyes of the images and the sacred image is brought to life.

Bandi translated the Sanskrit words Prana Pratishtapanam to mean “establishing the breath within the sacred image by inviting the Divine to live in the image. Until that is done, the image is just stone,” he said.

Outside the main worship hall, a sanctum has been prepared for the deity called Ganesha, the Hindu god that brings faith to remove obstacles.

The four sanctums inside the main hall have been prepared for the main deity, Lord Venkateswara, also known as Balaji, who is believed to be a form of the Hindu god Vishnu and represents the power of sustenance.

The deities located on either side of Venkateswara will be Srideva, the goddess of wealth, and Bhudevi, the goddess of earth. At the rear of the main area is a sanctum for Garuda, the king of the birds, who is considered a messenger between the gods and men. A smaller deity, Anjaneya, known for his courage, power and faithful service, has not arrived from India.

While all of the finishing touches on the building, including the laying of granite tiles (quarried in India) on the community hall floor, might not be completed by Wednesday, the celebration will go on.

Events on each day leading up to Sunday will take place outdoors, primarily in tents. Religious activities will include prayers, the singing of hymns and lighting ceremonial fires.

The sacred fires, typically fueled using wood and clarified butter, are a means of Hindu worship. The ritual involves a priest placing things like rice and herbs into the sacred fire while hymns are sung.

“Every prayer has power, but fire has tremendous energy to transfer things faster. It’s like when you mail something. It takes longer to get there by regular mail than by email. The sacred fires also have a purifying element. They purify the air,” said Venkata Laxmi Narsimhacharyulu Trichukachi, the temple’s priest who affectionately is called “Murthy Garu.”

The priest, who will live in a small home on the property, comes to the local temple from Pittsburgh. The local Hindu community is exploring hiring a second priest.

In the Hindu religion, there are no regular service times. Devotees are free to visit the temple and request that the priest perform a service anytime during the day when the temple is open. During special observances or holidays, the community might gather at a specified time.

“Some people may like to stop in before or after work, but we expect Saturdays and Sundays to be the busiest days,” said Jagdish Medarametla, a member of the board of trustees. “People are looking forward to being able to come to the temple, which is God’s house.”

Until the temple opens, the local Hindu community will continue to take part in rituals and worship at altars in homes.

More information about Sree Venkateswara Temple of Cleveland can be found atwww.balajiusa.org.

Colette Jenkins can be reached at 330-996-3731 orcjenkins@thebeaconjournal.com. She can be followed at https://twitter.com/ColetteMJenkins.

Find this article at:
http://www.ohio.com/news/local/local-hindus-ready-to-celebrate-opening-of-sree-venkateswara-temple-in-richfield-1.399064