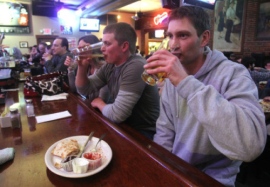 New Ray’s Place opening in Fairlawn to be designed by David Pelligra and Architects Inc.

Ray’s owner Charlie Thomas said if all goes as planned, he will open by October at the former Winking Lizard Tavern location, in the plaza at 25 Ghent Road.

Thomas, who has owned the 76-year-old Ray’s for nearly 35 years, said he has been thinking about a second location for some time, but was a little surprised when he found the spot in Fairlawn.

“This became available last fall and when I went to look at the property, I said, ‘I think this is us,’ ” Thomas said. “The price was right … I think we can do really well here.”

The Winking Lizard moved to a new 10,000-square-foot location in Copley Township in April, but announced its plans to move months earlier.

Thomas said he’s already starting to hear from Kent State University alumni who live and work in the Fairlawn area who are excited about a location opening near them. He also has had new customers coming to Kent to check out the place to see what’s coming to their neighborhood.

Ray’s Place features a menu of burgers, sandwiches and entrees along with a large selection of beers.

Thomas said the menu in Fairlawn will be pretty much the same as the Kent location, including the famous MoFo Burger: two beef patties stuffed with bacon, mushrooms and American cheese, finished with relish, onions, pickles, lettuce, tomato, mayonnaise, mustard and ketchup — every topping in the house.

The Fairlawn location is 6,500 square feet and will feature 60 beers on draft, including a large selection of craft beers, Thomas said.

Last week, the Fairlawn Planning Commission approved plans for $70,000 in renovations to the plaza.

According to the application filed with the commission by Jennifer Smith of David Pelligra & Architects Inc., “the remodel is creating a more consistent facade for the entire building and encourage a new restaurant to fill the void in the vacated spot.” The building is owned by Sandra Noll, SJL Stonegate LLC.

Bill Arnold, assistant commissioner of the Fairlawn zoning, housing, and residential building department said Thomas would have to apply for building permits for any renovation work he wants to perform inside, but there was nothing that would stop the restaurant from opening as planned this fall.

Ray’s Place has been a fixture in downtown Kent since 1937.

In 2009, chef Michael Symon of Cleveland mentioned Ray’s Place in an article in Food Network Magazine. When asked about his favorite burger, Symon said it was Ray’s MoFo. In 2011, the Food Network show Best Thing I Ever Ate featured famous chefs talking about the best burgers they had ever eaten, and Symon again named the MoFo.

Last year, KSU associate professor Patrick O’Connor began working on a book to commemorate Ray’s 75th anniversary, and sought stories from the public about the landmark. The book is to feature fond, funny, sentimental or weird memories shared by employees and customers.

Thomas said the book, which is being published by Black Squirrel Books, an imprint of the Kent State University Press, is expected to be released in late August.

Book signing events will be planned at Ray’s when the book is released and during Kent State’s Homecoming on Oct. 5, he said.